There’s a rising backlash against the preponderance of mobile devices in our lives. The argument goes something like this:

We’re all glued to our devices, oblivious to the exciting swirl of humanity around us. We’re focused on tiny glowing screens instead of each other’s faces.

There’s an undercurrent of nostalgia for a better time before all this cursed mobile technology.

A time when we walked down the street and smiled at each other, waving hello. At bars, we chatted with our barstool neighbors. Our children always had our undivided attention. Our dog’s ears were always scratched.

This, like all nostalgia, is a seductive lie, a false retelling of our own lives that casts a shadow on the present moment and makes it hard for us to see things as they really are: complex and nuanced. 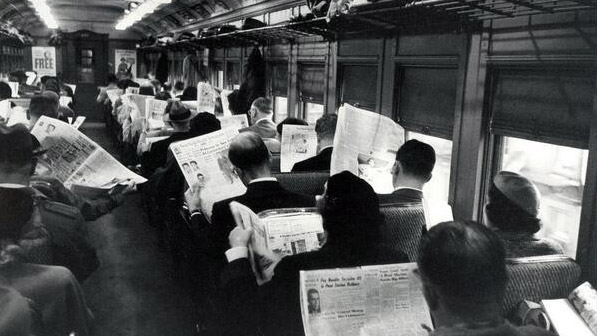 Commuters with their newspapers, the iPhones of yesteryear

At bars, we watched the TV, not each other. In the absence of a TV, we’d search for a newspaper, a magazine, a coaster — anything to stare at instead of each other.

Strolling down a subway platform today, I see this history presented before me like layers of sedimentary rock. Older commuters stand with heads hidden behind The Times or with eyes fixed at exactly the same angle it would take to check a text message, only they’re reading 50 Shades of Gray.

There are some 30-somethings, too, caught in a refined chasm between the books they grew up with and the technology that grew up with them. They’re typically reading paperbacks while white cords snake from their ears to their back pockets.

A few have given in and tap furiously on digital candy bits or virtual barbarians, their leather briefcases sandwiched between their Cole Haan loafers, tongues tucked in the corners of their mouths.

Devices have not made us magically cold or inhuman. They’ve just given us something more enjoyable to stare at. Much of the criticism of mobile technology is a misdirected attempt to reclaim humanity from the clutches of a robot gone amuck.

But there is no robot. There’s just… us.

Removing the tech doesn’t solve any problems that didn’t already exist. Without smartphones, we’d still have to deal with the most awkward interface of all: each other.